I Ran A Marathon

It’s official. Today I traversed 26.2 mile on foot in my first marathon attempt.

I had the most amazing experience and I know words won’t come close to accurately describing everything but I’m definitely going to try.

Word of warning: This will be long.

The night before: I had crazy dreams. Of course, I don’t remember any of them now. They were just crazy. Plus, once I woke up around 3:30 I kept sleeping for a few minutes at a time. Maybe the dreams were just too weird. I wasn’t worried though. I got a great night’s sleep Thursday night.

Pre-race at home: I had everything laid out the night before and easily got ready though the nerves were starting to increase. After my devotions I had to run upstairs and throw some clothes and a hairbrush in the car for after the race. I almost forgot!

Pre-race at the stadium: It was cold but not like yesterday. The biting winds Friday made me think I would need a throwaway sweatshirt in addition to my gloves. I’m glad I couldn’t find a sweatshirt I wanted to throw away. My fingers were thankful for the gloves while I waited. I almost bought a 26.2 sticker then (not sure why I didn’t see those at the expo) but when he said I could buy one after I decided to do it then. (Or get Dad to buy one. 😉 )

Miles 1-4: I kept glancing down at my Garmin despite what I said in my plan to make sure I was on my pace. The whole thing was so new and my head really wasn’t in the game yet. Oh, being passed by the half marathon leaders after mile 2.5 was psychologically unsettling but the routes broke off after about 1.5 miles.

Miles 4-7: I think I settled into good head space but I can’t remember. I’d taken off my gloves and stuck them in the front pocket of my pants. I kept looking forward to mile 7 where I’d be able to hand the gloves off to Dad and see a bunch of friendly faces. 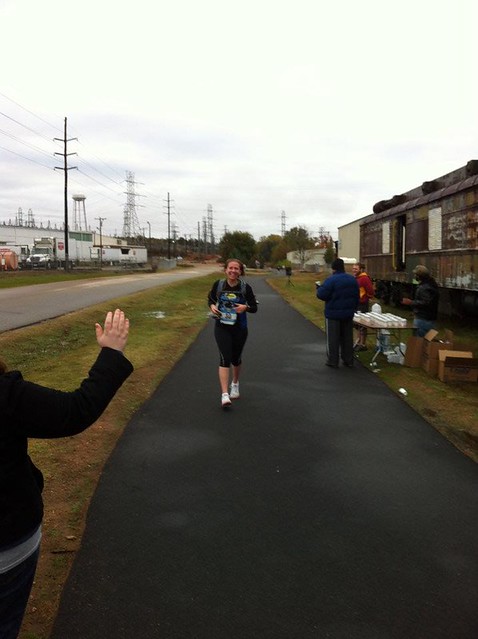 (I’m fairly certain it’s a problem to strike on the outside of my foot. Maybe I should work on that.)

Miles 7-9.5: Ironically about a tenth of a mile past the water stop my hands got cold again. Thankfully that didn’t last long. 😉 I was all over the place during these miles. We were on the Swamp Rabbit Trail for these miles and everything had gotten really spread out. It felt like a glorified training run. The closest runners were a hundred yards ahead or so; I could see no one behind me. As much as I told myself it would be okay even if I finished last (which I couldn’t possibly…I knew there were other people behind me) my mind kept working against me. When I looked down at my Garmin and saw a 12:45 on the pace I knew I couldn’t stay that way. I told myself I had to pick up the pace and maybe even catch that couple ahead of me.

Miles 9.5-18 I finally caught up to the couple at the mile 9 water stop and settled in behind them. At first they kept looking back and at one point asked if I needed to pass. I didn’t. They were running my pace. I decided then that my goal was to run right behind them the rest of the race. (I almost made it!) It was just what I needed; I was no longer alone. Even though I didn’t know them I felt like I was running with them. Thanks for pacing me James and Rachel! (If you happen across this entry leave a comment so I can get those pictures!) I didn’t end up taking any walking breaks either. I grabbed a Gu gel at each of the 3 stations and used those which were easier to eat on the run.
During this portion I ran past the YMCA which is the start of the half marathon I’m running in January. That’s not going to be a flat half.

Miles 18-25: My hips really started to ache when we got onto the Furman campus (all those hills!) Things started to get difficult here. I kept pushing myself to stay with James and Rachel since he kept mentioning that they were just ahead of her 5 hour goal. All the little hills on the course hurt so bad. I knew they were coming too because we were back on the Swamp Rabbit Trail. I wanted so bad to stick with James and Rachel so we could exchange contact info and I could get the pictures. (James would race ahead at certain mile markers to take pictures of Rachel. Since I was right behind I’m sure I’m in nearly all of them.) I just couldn’t do it though. It was all I could do to keep jogging until the mile 25 marker.

Miles 25.0-25.6 I grabbed my pack of chomps and ate the whole thing. My hips hurt so bad I didn’t know how I’d be able to start running again once I finished. I bargained with myself; I would alternate between running and walking every tenth of a mile. When I started running again I almost started crying. I could barely lift my feet off the ground. I walked another tenth and then started jogging again. That’s when it all changed.

Miles 25.6-26.2When I was running the next tenth one of the spectators said something about remembering my training, all the hard work I’d put into this race. I knew I had to finish the race running. Something shifted in my mind that affected my body as well. I started to not feel my hips as much. The best running songs came on my ipod. (Okay, I cheated and put them on again at the end of the playlist for this very reason.) I started to pick up my speed and by 25.88 I was running a 7:34 pace. (what!) My emotions were a mess too. When I came around the second to last corner it finally started to sink in that I was mere moments away from finishing a marathon. Mom waited outside too and took a few pictures. 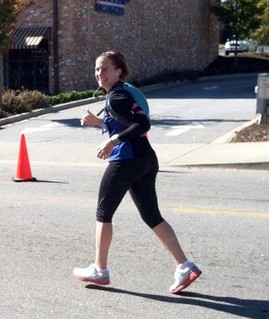 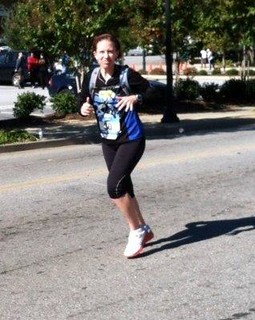 I had just finished waving but she took the picture just a little too late. Still, all kinds of ridiculous captions could be made up.

I rounded that last corner and started to sprint down the final downhill before I entered the stadium. My hips hurt less than half a mile ago? What? I don’t feel anything but indescribable emotion.

Both Mom and Dad took plenty of pictures once I entered the stadium. (I love finishing in a baseball stadium and getting to run around the entire field!) 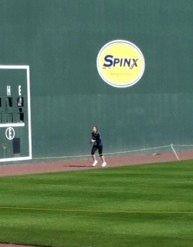 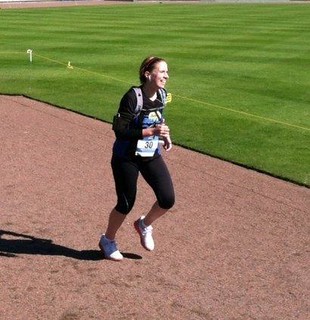 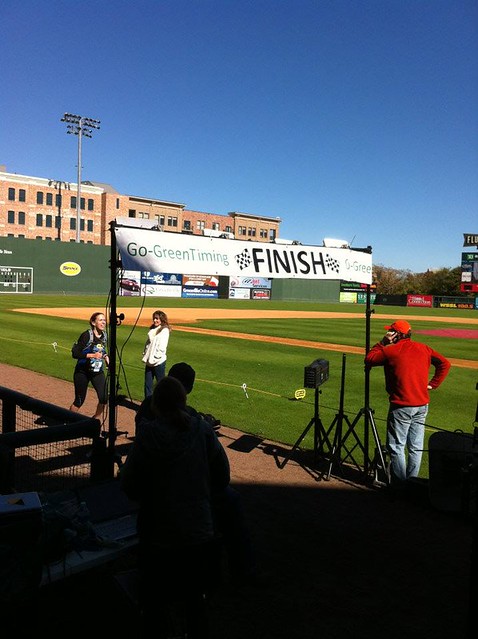 Then came the icing on the cake. As soon as I crossed that finish line I stopped my Garmin and then looked at the time. 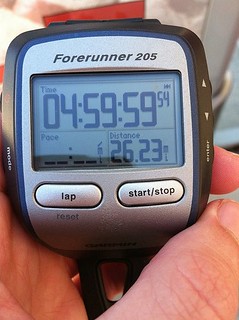 I was on cloud 9! When I had to walk at mile 25 I knew a sub 5 hour time was out of reach. God certainly works in mysterious ways. I got my sub 5 hour time by 6 hundredths of a second! 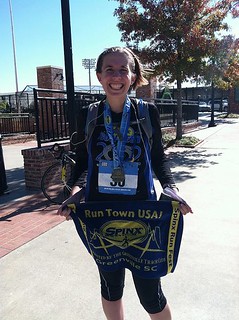 I changed very slowly and then indulged in a venti salted caramel mocha and an amazing calzonne.

I couldn’t finish it. I was too tired!

I’m not done writing about the marathon. (of course) I have two more posts planned: 1 a reflection on my performance and future running goals, 1 a review of the course itself. (I have a lot to say about that actually.)

Thanks for sticking with me! (Oh, and Reem, it was great to meet you today! Congrats on your finish!)

22 responses to “I Ran A Marathon”