I came away from this race disappointed with my performance. After taking some time to revaluate, I can look at my performance and see where I still need to improve. I’m also beginning to think that my PR performance from 2014 is a bit of a fluke. I haven’t broken 22 minutes since then. I think I want to try; I’ll just have to start trying to fit in some track work and other short speedwork before I try again. I also might want to pick a race that’s not in the middle of summer.

Heading into this race I decided to focus once more just on form and not look at my watch at all. I also knew that I wanted to run fast, whatever that meant.

We arrived with just enough time before the start. 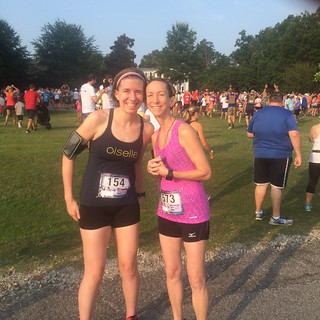 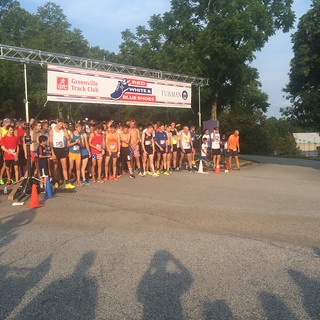 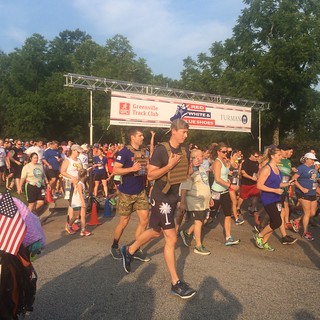 I managed to squeeze in fairly close to the front and didn’t have any trampling issues this year, thankfully. It still is crazy crowded though. I’m not a fan but since I’ve decided to try for the Peachtree Road Race next year, I should probably get used to it. 🙂

The weather was not my friend today. I think it was only marginally better than Atlanta where they ended up putting the weather alert up to red.

I had no idea how fast I was running but only a short ways into the race I could already feel the sweat pouring off me. It made me wonder if I would be able to keep it up for the rest of the day.

Fitness-wise I felt great but the heat definitely started to get to me mentally.

The next mile brought on the suffering. I felt drained and had no idea how I would possibly be able to make it through all three miles. I started to bribe myself with a short walk at mile 3. After all, this wasn’t an A race or anything.

Mental fitness is definitely something that I need to work on. It’s been a while since I’ve really pushed myself in a workout or race and I miss it. Like all parts of fitness, if you don’t use it, you lose it.

Mile 2: 7:04.6
Those splits. Wow. I don’t think I’ve ever had splits that nearly identical before. If I had kept that up for the last mile, I just might have gotten a PR and I definitely would have broken 22 minutes.

After I walked at the 2 mile mark, it was definitely easy to give in again. I started running about 30 seconds later and then had the hill behind McCalister and started thinking about walking again at the half mile mark. I should have pushed through. I really should have. It’s a 5k. There’s going to be pain. I definitely do not remember much about that mile except for the fact that I hated it.

I made the turn to head downhill before the final turn into the stadium and tried to pour on a sprint. I got a little bit of it (average 6:30 for the last .1)

I have to admit that I was disappointed with the time, mainly because I gave in and let myself walk. I can do better than that. I was also disappointed because instead of getting pictures, Ellis accidentally got Siri. (We’ve all done it.) I was upset then but some time away has helped me put it in perspective. I ran my fastest 5k time this year on a ridiculously hot and humid day with very little specific short speedwork.

Registration and packet/bib pick up:
Registration through go-green was painless and easy as always. Mom and Ellis picked up the bibs and shirts so it’s hard for me to review that.

Race shirt:
I do not like these shirts at all. The one positive is that they seem to have gotten away from the Leslie Jordan tech ts. I have never liked those. The main problem that I have with these shirts is that they are white and almost completely see through. That may work for guys but about half of the people who ran the race were women, some of whom may not want their sports bras to be seen when they run.

Pre-Race/Race Morning amenities:
One really nice thing about the Furman staging of the race is the availability of indoor bathrooms. That is always appreciated.

Course:
This is a PR-able Furman course. If only they would use it in weather than doesn’t practically sweat you to death. It is fairly flat. There were plenty of course monitors. Furman University is beautiful setting for a race.

Course support:
I did not grab water at the one water stop positioned halfway through the race. Plenty of other people did, a lot of them throwing the water over their head in an effort to cool themselves off. For a 5k, one water stop is plenty.

Finish line and post-race amenities:
I love the finish on the football field. It’s a great spectator area with plenty of room for post-race festivities like a pie eating contest and foam pit and other things that I did not participate in. This race offers a lot.

Race photography:
I am sure that there were pictures taken at this event. At the time of initial publishing of this post, they had not been posted yet. However, I try to get my posts written as soon as possible after I run so that I forget as little as possible.:) I will update this section as soon as the pictures are posted. (Yes, this is exactly what I wrote for Sunrise. Still applies.)

Social media:
The GTC had several posts leading up to the race and a few on race day but as of 2:30pm on race day only three posts were on the page for the race: one about race day being here and two videos of the pie-eating contest. This is definitely a step up from the past but there’s still room for improvement.

Results:
A running friend of mind suggested this after reading my Sunrise 8k review. I think it’s a great idea and plan to incorporate it in subsequent reviews.
I love when a race director uses racemine because the results are available almost instantly. As soon as I climbed the stairs out of the stadium I looked up the results and could see that I had finished 5th in my age group and Mom had snagged 3rd Grand Masters. This is much appreciated.

I really love running this race on my birthday but will probably take a break from it next year to head down to Atlanta for the Peachtree Road Race 10k.