Every year I run this race I have more than a few thoughts of “why on earth did I sign up for this?” Every year I finish the race ready and hungry for more. This year was no different.

I woke up ready for this race, ready to get out there and run. Talk about a change from last year.

Running has been going really well lately. I still wish that my total volume was back to the level that it used to be but it’s getting there. I am determined to build back up the right way so that I’m able to keep running at this level for a very long time.

I did not set any time goals for this race or even any goals about the mountain. I knew, however, that my fitness is at a much higher level overall this year than it was last year. Thus, I thought that a small PR might be within reach even though I have done absolutely no hill or speed work.

Mom came with me today but did not run the race. Instead, she ran a shorter route around the Furman campus before waiting for me to finish. Thanks to her, I was able to enjoy a ride across campus which significantly cut down the trip from packet pick up at Timmons Arena to the Shi Center. 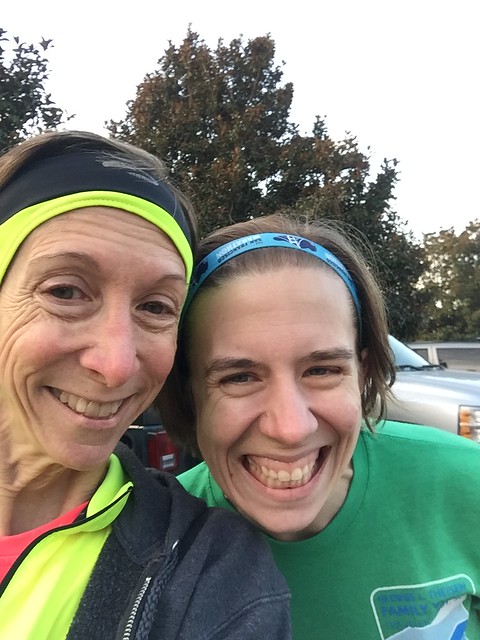 With nearly perfect timing, we arrived at the start with barely five minutes to wait. We did start a couple minutes late so that all runners were able to make it to the start line.

After a count down we were off! 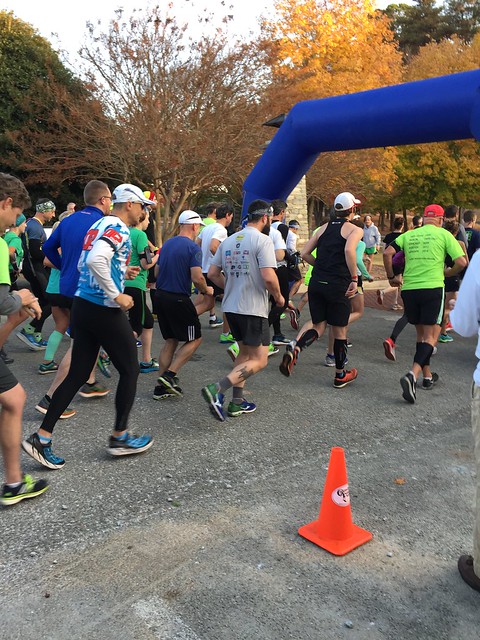 Early in the first mile I started wondering why I signed up for this again and signed up last minute at that. (I have had the race on my calendar but had to wait until after payday to finalize my registration.

The first mile is fairly easy but the mountain looms. In years past, I’ve gone out too quickly. This year I stayed right no track.

The first mile on the mountain is not actually that bad. You can tell that you are moving uphill but the ascent is not too steep and it almost lulls you into thinking that you might be able to run all the way up the hill.

I kept pushing even though all I wanted to do was walk. I thought multiple times about my motivation for signing up for this race. I hate hills, at least while I am running up them.

I made it to 1.5 miles up the mountain and had to walk. I started wondering if my rough estimation of two miles on the mountain was wrong and if it was much longer. Thankfully only a half mile remained until the summit of which the worst part is right before the summit. You’ve been running up this mountain for nearly two miles at this point and the most significant grade of ascent is right before the summit and a little bit of a break.

I walked again on this portion. It’s just so ridiculously steep. Then I saw the volunteer at the top and looked through the trees. The summit and water stop awaited. Unlike last year, I refused to be photographed at the summit while walking. (I don’t know if pictures were taken at the summit but I was definitely running.)

I grabbed Gatorade at the water stop and headed into the rest of the race.

There is something remarkable that happens once you reach the summit and head down the mountain on the other side. You are filled with this amazing sense of accomplishment and power even though you have a majority of the race yet to come. This feeling can be described in no other way than a high or a thrill. This feeling is why crazy people like me keep signing up for races like this that require us to push our body to its limits and beyond.

I settled into the race and immediately started daydreaming about completing an Ironman.

Something else I learned about myself in this race? I need to incorporate some downhill running into my training. Downhill is almost more difficult than flats or hills/mountains.

Heading down the mountain actually has a couple short inclines mixed in which makes the downhill easier to handle. There is one short significantly steep section that it is almost impossible to maintain a decent pace without tripping over your own feet. I tried but then indulged and stopped holding back. My right hip/glute was not happy about that for about half a mile after that. Each time I extended my stride a little too much I could feel a pinching in the glute. That made me focus on form even more. Thankfully that discomfort was momentary and i was able to settle back in for the back half of the race.

It was in this back half that my race was made. I focused on maintaining good form and pressing forward. I continued to avoid looking at my Garmin and trying to figure out what sort of time I would finish with or obsessing with my pace. This technique has worked well for me. I plan to keep it up if at all possible.

The back half of the race is full of rollers, the epitome of rolling hills although these usually started with a significant downhill that helped you swing back into an uphill with more incline than portions of the mountain. Thankfully these hills don’t last very long. These kinds of hills are my kind of hills. I can keep pressing when the other runners around me start to drop back. I ended up passing more than 5 or 6 people on the back half. In a race as small as this, that’s significant.

Some time after mile 10 I started glancing down at the Garmin occasionally and caught glimpses of my pace. Several times the pace was between 7:30 and 7:45. I remember telling myself that I had no business running that sort of pace. I tried to slow myself down but it is incredibly difficult. I told myself that I was going to pay the price and soon but I couldn’t get the pace down without walking. I ended up walking for a little bit but told myself to keep going. I was too close to give up now.

My legs protested loudly during this last mile which is hands down my least favorite thanks to running on the shoulder of the highway for a portion. (This highway as I have mentioned before has a horrible camber.)

I kept pressing forward though. I was almost done.

Just after the mile marker I indulged in a glance down at my Garmin and saw that I had a chance to finish under 1:50. That opportunity never even crossed my mind. Even though little was left in the tank I took off as fast as I could and powered through the finish finishing the last .4 in a 7:57 pace. 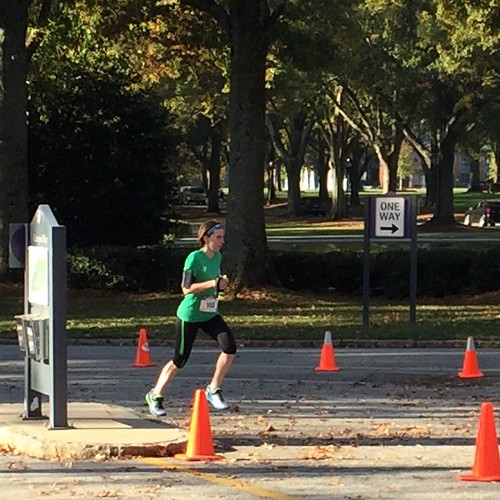 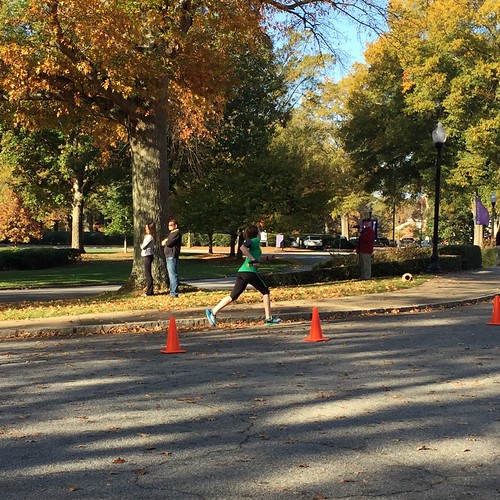 That is an exact 6 minute PR.

I am still in shock over that result. Now I am beyond pumped for all the races that I have planned and pumped to return next year and see if I can get all of the miles below 10 minutes and maybe even run under 1:45.

Race Review
Registration and packet/bib pick up:
Registration was easy and so was packet/bib pick up which we did on race morning. I was pleased to see that there was considerably less confusion about all the organization surrounding the race, most likely because the 20k was selected this year to be the state 20k championship.

Race shirt:
The shirt this year is excellent. Unlike other Greenville Track Club races, PMRR has a good track record for excellent shirts. While I don’t think I will run in this shirt, I will definitely hold on to it to wear at other times.

Pre-Race/Race Morning amenities:
Timmons Arena is an excellent starting point for a race. We have access to the full indoor bathrooms which is always preferable. One just has to keep in mind that the start for the 20k and 10k (new this year) is all the way on the other side of the campus.

Course:
To say that this course is challenging would be a significant understatement. That’s why I love this course though. I think the challenging nature of this course should be championed even more than it is and made a major selling point of the race because there is a whole, rather large market out there of people who seek after the insane challenges. This could be a big race and a draw for the GTC if it was marketed properly. November is an excellent time of year to hold the race too. Paris Mountain is beautiful in the fall.

Course support:
The smaller nature of the race means that there, obviously, aren’t spectators lining the course. That’s totally fine. There were 4 water stops, three of which had Gatorade. (I’m not sure why one of them had only water. Maybe they forgot to get enough?) The volunteers were great both at the water stops and the ones serving as course monitors.

Finish line and post-race amenities:
I really enjoy the new finish line location, in front of McAlister Auditorium. This year’s medal is pretty snazzy too. A very large part of me hopes that this race continues to be chosen as the state’s 20k championship because that seems to help the GTC step up their game a little. 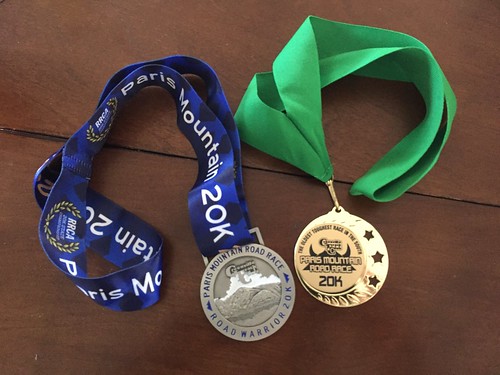 (This year’s medal is on the left; last year’s is on the right.)

Race photography:
I will update this portion later. I usually get my race recaps up before the photographers have a chance to edit all the pictures they take. I saw several photographers out on the course so my hopes are comparatively high.

Social media:
I do not pay as much attention to social media as I used to but I did notice that the GTC posted several more posts about the PMRR than previous years, likely because the race was chosen as the state’s 20k championship. The old Facebook page specifically for the race is still up though. I think that the board members of the GTC have been unable to find the person who used to maintain this page and thus have been unable to update or transfer management of the page. All the other social media updates have been on the GTC’s page.

Results:
I was so excited to see that Palmetto Timing was hired for this race. This meant that results were available immediately after the race. That goes a long way.