I hope that I am able to keep up this tradition for quite a while. I have run this race every year since I first became a runner back in 2010. It’s pretty crazy to think that I have been running for over 6 years, only 3 years away from double digits.

We headed down a little earlier this year than last since we waited until race day to pick up the packets. We had plenty of time to get everything done.

This year the organizers added a 5k. I am not sure if that actually increased the number of participants; there have always been a lot of people that run this race. In years past I have made the mistake of not lining up close enough to the start. I was not about to make that mistake again. 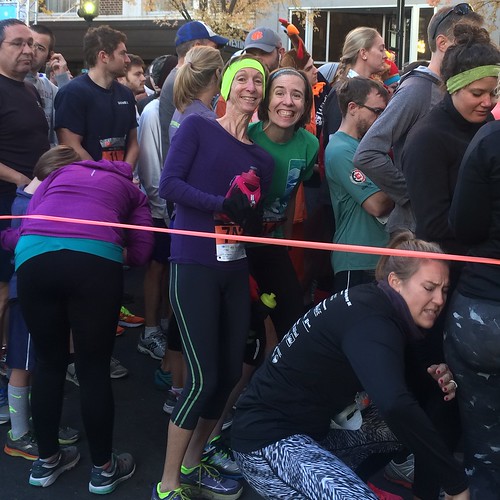 Almost right on time, we were off! This year, unlike others, I was able to start my Garmin only a few seconds after the countdown and “gobble” that started us off.

I was ready to run and push the pace just a little. It’s a good thing that marathon training starts in earnest now. I am definitely ready to start competitively training again, finally.

I can definitely tel that we started close enough to the front because our first mile pace was right on track with the the next three miles, no traffic slowdown.

One thing I noticed fairly soon was that the course was completely different than previous years. I think that part of it is due to the construction on the Swamp Rabbit Trail which has a large portion closed. Part of the course change may have been due to the addition of the 5k. Regardless, that meant that I really had no idea what to expect to come next in the course. 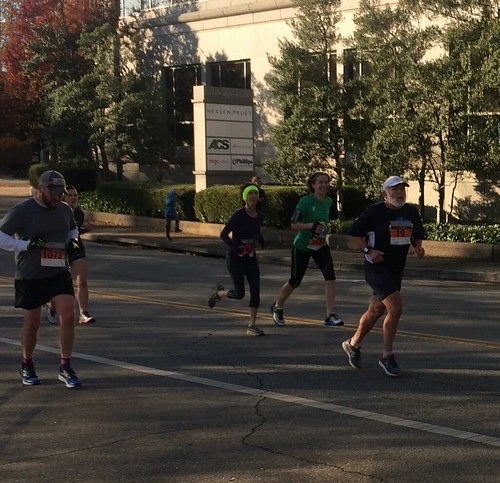 The middle two and a half miles were fairly uneventful. We kept up an even pace. I felt really good. I think I started to pick up the pace towards the end of the fourth mile because I was feeling so good. I also remembered thinking when I saw the fourth mile marker that this race is far too short. I was not ready for it to end. That’s a sign that I have been running a lot of long distances lately. (I am so ready for marathon training!)

The last mile came and so did an absolutely ridiculous hill. I saw it when we passed on the way out and knew that it would be a bit of a challenge, especially for Mom. Hills are not her strong suit, yet. 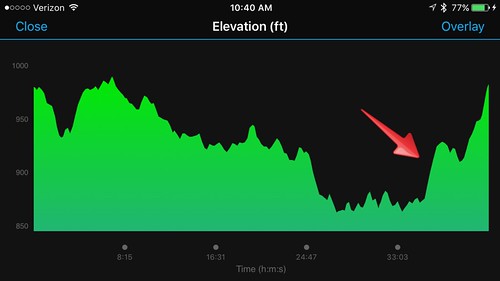 She did slow down on the hill. I kept trucking and got to the top to see her farther back than I thought. She ended up walking most of the hill. I slowed my pace and she fairly quickly caught up to me. 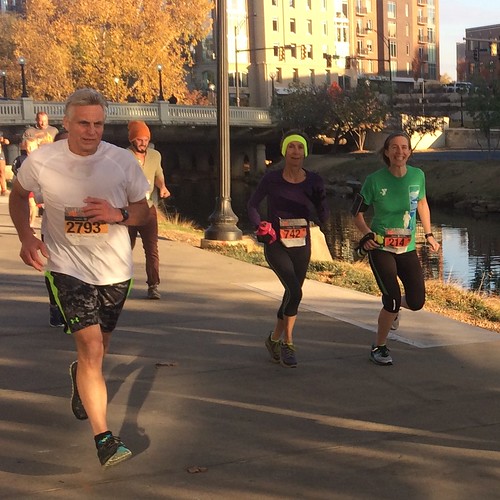 Then just under a half mile remained and the 5k course rejoined the 8k. I am not a fan of courses like this because when the longer and shorter races merge, usually the faster runners in the longer race have to deal with weaving around the significantly slower runners in the shorter race. This was no exception. With the large number of runners overall in the race, I knew that there would be no easy way to stay running next to Mom so I told her that because of the merge we would have to fend for ourselves at this point. She was okay with that.

We made the turn and instead of turning left onto Main Street like most of the downtown Greenville races I run we turned right. Instead of finish on a nice downhill we had to go back up the hill. Good thing I eat hills for breakfast. I kept pushing for a strong finish.

I finished feeling more than ready to really dive back into competitive training again. Bring on the marathon!

(She had no idea I was doing that.) 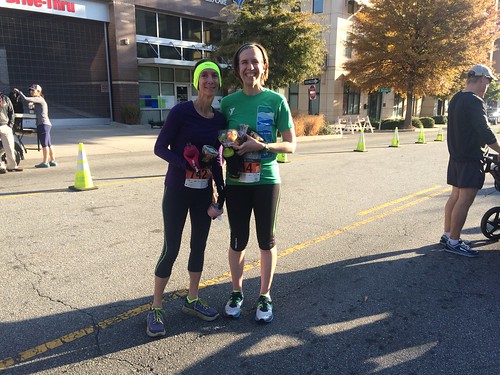 That is an exact 6 minute PR.

I am still in shock over that result. Now I am beyond pumped for all the races that I have planned and pumped to return next year and see if I can get all of the miles below 10 minutes and maybe even run under 1:45.

Race shirt:
This race offers a no-shirt option. I don’t always choose that but when I think about the fact that I usually give the shirt away, I usually do not consider the shirt to be worth $5 so I opt for the cheaper registration.

Pre-Race/Race Morning amenities:
The race start is always packed but because all of downtown Greenville’s garages are free on Thanksgiving, it was no trouble at all finding parking. We were a little disappointed that Carolina Ale House’s indoor bathroom wasn’t open this year but they had plenty of portopotties.

Course:
I am not a fan of the updated course. In my opinion, they ran it backwards. I think it would have worked much better had everything been flip flopped. I still prefer the course from last year. Even with that, this is a good course. Downtown Greenville courses usually are.

Course support:
There are plenty of people out on the course. It is well marked. There is no chance of getting lost. Two water stops for an 8k is more than sufficient. They were well manned too.

Finish line and post-race amenities:
I was so happy to see that Spinx was sponsering this race as well. I love all of the post race refreshments that they offer. I always load up on the grapes. For this race they had a fruit tray that had grapes, two kinds of apples and some cheese.

Race photography:
I will update this portion later. I usually get my race recaps up before the photographers have a chance to edit all the pictures they take.

Social media:
I have not been on social media that much lately and when I have it has been focused on other topics. I will have to research this later.

Results:
Palmetto Timing was on hand for the race again this year. I love instantly available race results.